Today was a masterclass in not being married to your expectations. I was looking for an opportunity to short Amazon (AMZN). For the last two weeks, we had been waiting for AMZN to break 3325, but it kept testing and rejecting, even as the market boomed overall. My gut told me it could plummet, if market run up failed. I was mentally locked and loaded to buy puts.

But then, lo and behold, it finally cleared 3325. Most people know I don’t like to chase, and noticed the play late, but I knew what this stock would do.  Amazon was so pentup and ready to run.  Having broken that barrier, my model( watchlist levels) told me it was likely to go to 3350, and if it cleared 3350 it was probably going to 3375 and maybe even 3400. I ditched my plan to go short and instead went long, snapping up AMZN 3330 calls for $13.   It ripped through 3350 like it was nothing.  Check out the action in this chart and how AMZN reacted with the dashed blue lines.  UPDATE/Correction:  I apparently started buying the 3330 calls at 5.50 yesterday not at 13.  so on the volume hod break and in anticipation of the 3325 breakout vs after. 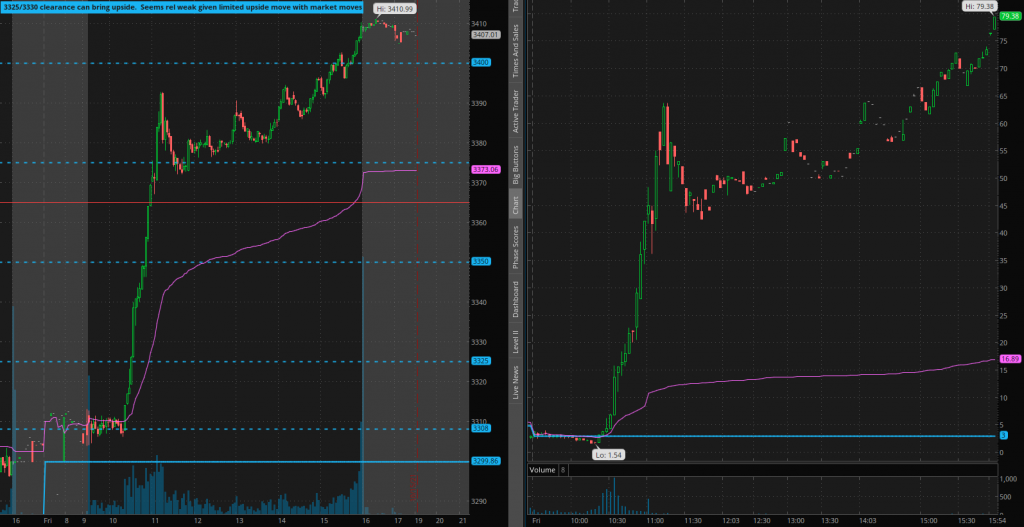 I had my sell orders set too conservatively definitely underperformed — but I made a plan for the 3350 level and executed to the plan. :).  While bummed, I’m not upset about the profits missed, instead I’m focused on reviewing what happened during my trade planning.   The bottom line, I didn’t make a plan for the breakout, and so I made a quick chase plan to the next level vs what I normally do — I was hyper focused the the planned trades on other stocks that worked out great.

By using the watchlist levels(dashed blue lines) to help guide and plan trades, you can get outsized rewards to the risk.  These plays don’t happen every day, but often enough to get educated about it.

The best part—all the work you had to do to see it coming was done in the first two hours of the trading day—to see if it would break 827.5. When it did, my model predicted that you could ride that wave all the way up to 838 and beyond.

Well, UPST was closing in on 400 and, per my model.  If you watched my Premarket Prep video this morning, that is where I planned to go short expecting a $10-15 drop. Sure enough, it peaked at 401 and broke bellow the 397 level and dropped like a stone. I didn’t make the trade(was busy with AMZN and TSLA), but my model predicted the move and if you had entered according to that plan, it would have been a quick and juicy profit with GREAT RISK/REWARD.

Premarket Highlights – What could you have done with $1000

Student Highlight of the Day

Edumomo student ryu2 grew his account a whopping 15% on the day trading AMZN in just two hours. Many of our members trade larger accounts so 15% is an amazing result.  If you have read The Power of 1%, you know our goal is just that.  Imagine 3 weeks of work in just two hours.  Congrats, ryu2!  You make us all look good.