We’ve been all over this, and it finally happened—Tesla (TSLA) announced earnings. The stock dipped, then it ripped hard. When I saw that it was headed for 895, I blasted out the notice that I was about to buy 900 calls between $3 and $4. Sure enough, those options ran to over $9 less than 90 minutes after open. 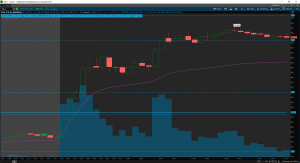 See why I call it two-hour trading? Just by following our process, you could have triple your money in those first two hours. If you bought three

Love him or hate him, Donald Trump makes waves. In this case, the former President moved forward with his long-percolating plan to fight back against his own social media de-platforming by launching his own social platform. To brin 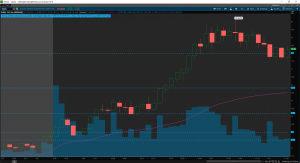 g that company public without the hassle of an IPO, he’s doing a back-door technique—a kind of reverse-merger of his private company with an already-public entity known as a “special-purpose acquisition company,” or “SPAC”.

This SPAC is called DWAC—Digital World Acquisitions Company, before we start to feel too much like characters in a Dr. Seuss book. It started the day at only 13. I don’t normally play penny names, but this is Donald Freaking Trump we’re talking about. Because millions of people are still passionately devoted to the Trump brand, this nothing of a company came on our radar in a big way.

DWAC is not done, either. No promises—this is a hot potato stock. It could rip up to 60, 80, and beyond. It could just as easily flush down to 20. Look for the rip if it breaks at 51 overnight, the flush if it breaks closer to 40.

I predicted a run on Netflix (NFLX) a week from now. Well, I was off by a week—it ripped today. I missed it because I was focused on TSLA, but that’s fine. I planned my trade, went for the kill, and got what I came for.

But any Edumomo member who was looking at NFLX while I was neck-deep in Tesla would have seen the early signs and pounced on a long position. Hope some of you took it down!

NVDA In The Clouds

NVIDIA Corporation (NVDA) announced their next-generation Cloud gaming platform, and pushed to all-time highs in the wake of that announcement. All eyes on NVDA—it could push through to 230 next week as this freight train of a market heads for all-time highs.

Student Trade of the Day

Julls gets it again for pouncing on those TSLA and DWAC trades for a 100% increase in total account value! That is how it is done.